The Solar Cupola proposal by the Danish studio led by Bjarke Ingels for the Joint Research Center promoted by the European Commission on the Isla de la Cartuja is inspired by the vernacular architecture of the Andalusian capital. 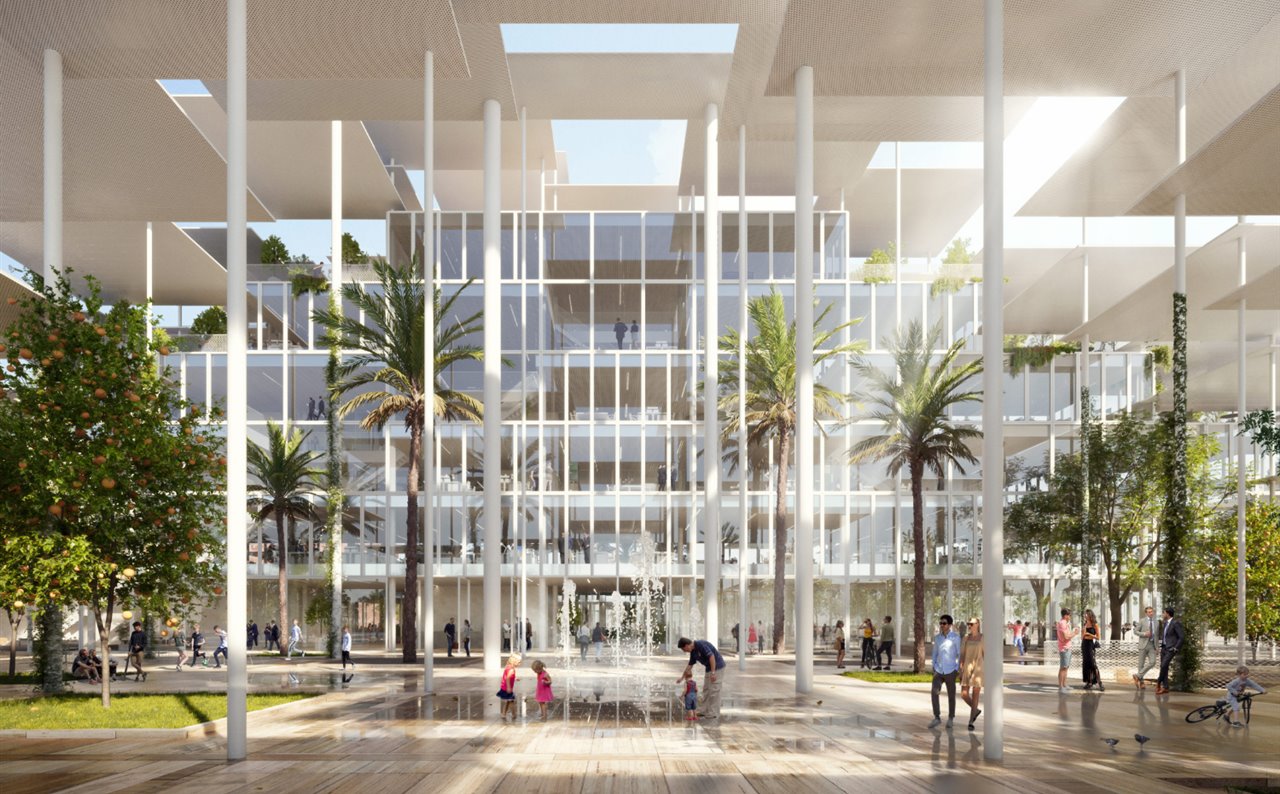 The gardens, the vegetation of the region and the water elements outside seek to reduce/eliminate the heat island effect and create a pleasant microclimate.

The Isla de la Cartuja in Seville, which for a time seemed to languish after the splendor of Expo’92, has been reborn in recent years as a powerful architectural pole linked to its activity as a science and technology park. The latest addition could not have more pedigree: the famous Danish study BIG Architects led by one of the most famous architects of the moment, Bjarke Ingels. Yours is the proposal Sun Cupola which has been chosen from more than 60 projects presented in the international competition organized by the European Commission to build the Joint Research Center (JRC), the Joint Research Center that will house twelve research units and support units. 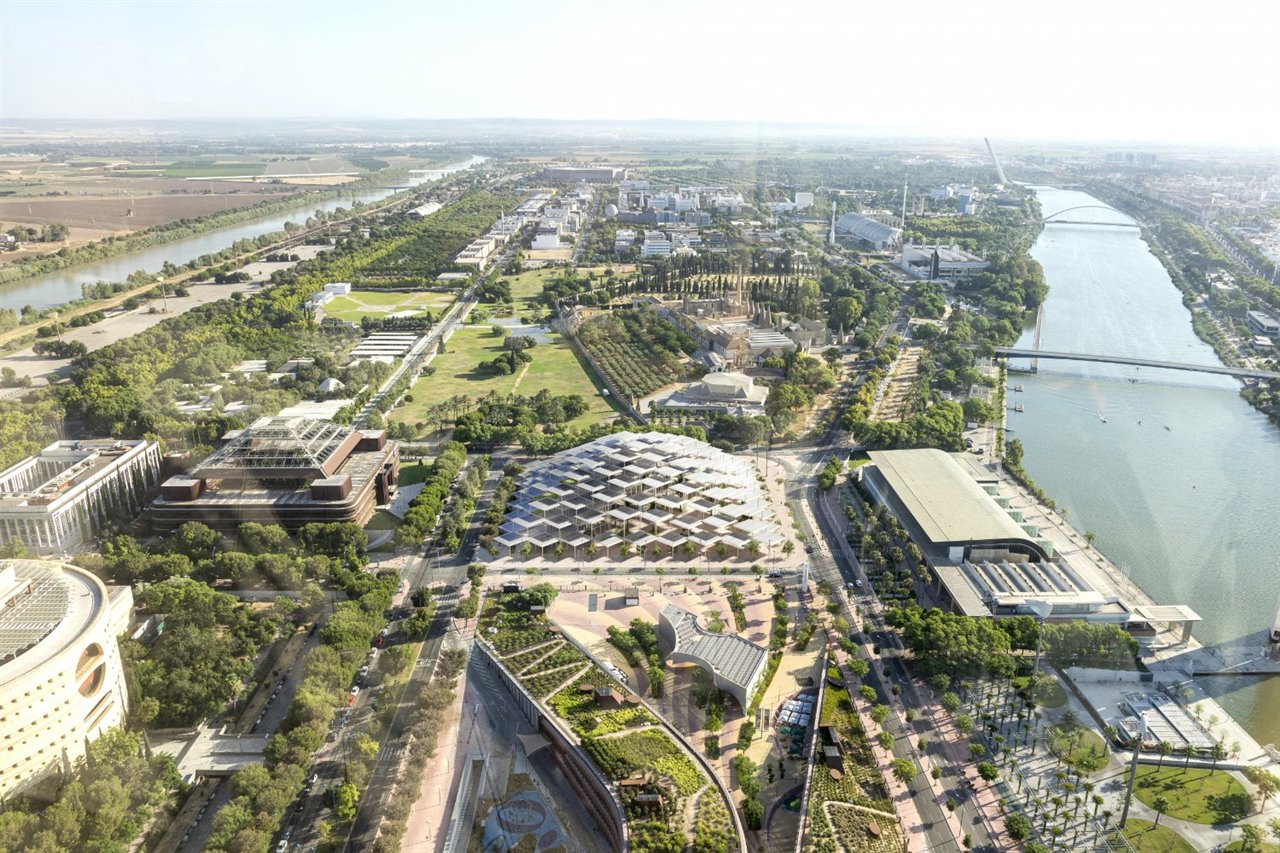 The building is located on the Isla de la Cartuja, which today has become an important scientific and technological hub whose activity contributes close to 2% of Andalusia’s GDP.

BIG Architects’ design draws inspiration from the vernacular architecture of Seville, meets the JRC’s commitment to sustainability and unites the European vision of the new Bauhaus initiative, setting a new benchmark for the workspace that empowers collaboration , co-creation and is adaptable to the future needs of the center. 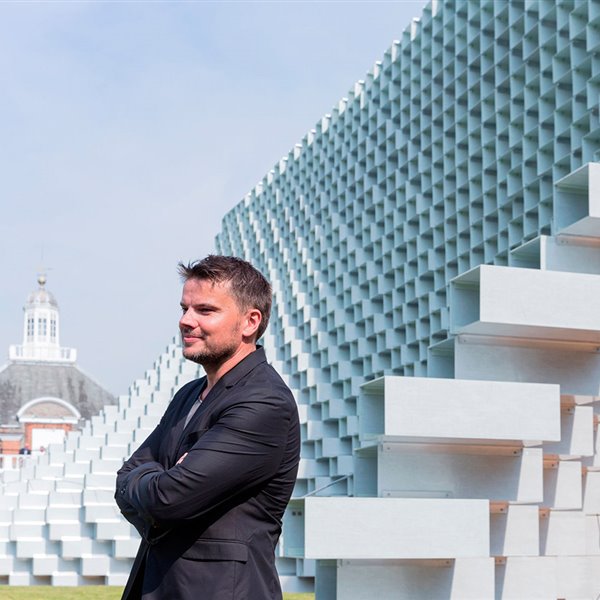 The new building of almost 10,000 square meters whose construction is scheduled to start in 2024, also links with the objective of the Seville City Council to become a world benchmark in sustainability in 2025 and the local vision of eCitySevilla to decarbonize and make the transition of the Isla de la Cartuja to sources 100% renewable energy. 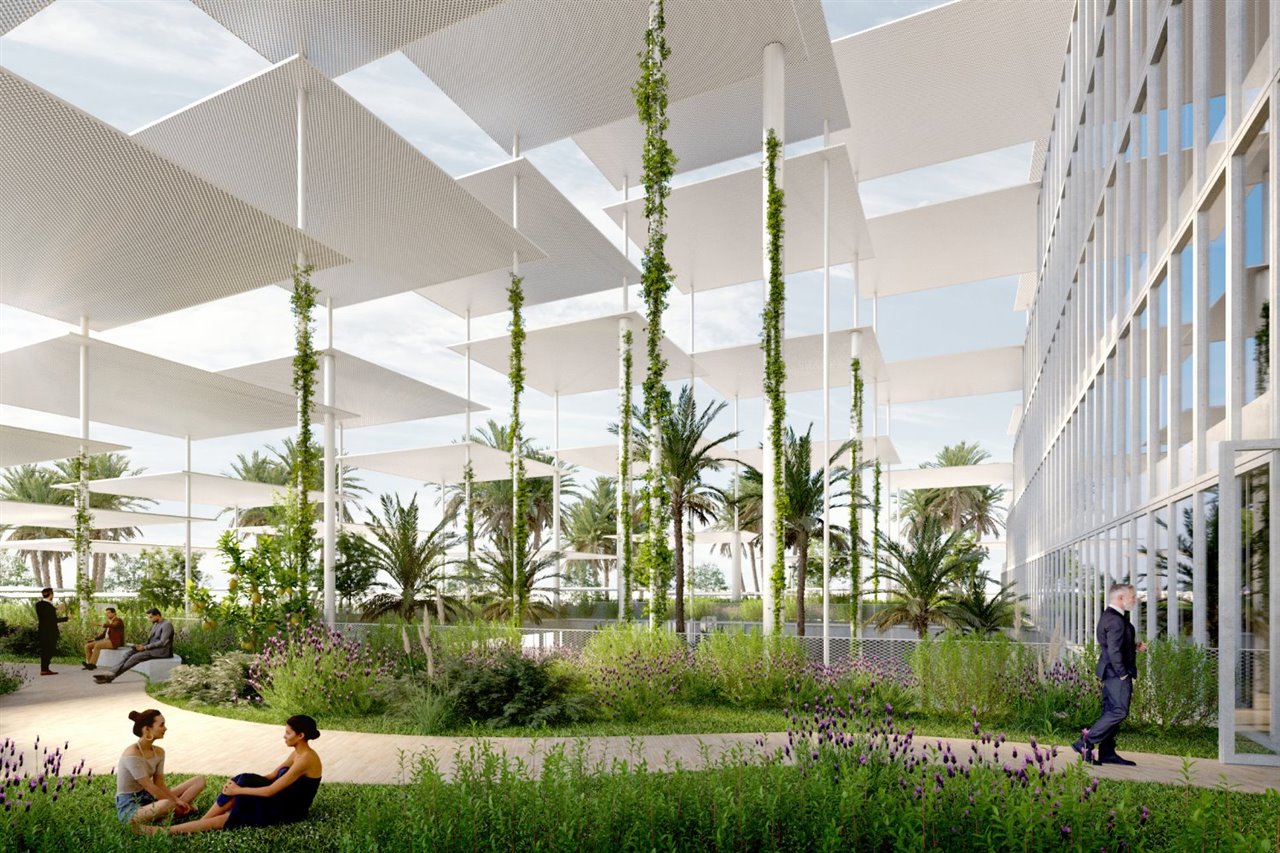 The passive design of the building through its thin floors and the constant shade under the cloud of pergolas, allows natural cross ventilation and ideal light quality, reducing energy consumption.

Taking inspiration from the shady squares and streets of Seville, BIG proposes to cover the project with a cloud of solar canopies that protect the square, the garden and the research building, in a similar way to the typical pergolas of Seville. The canopies are light square-shaped photovoltaic sheets supported by a forest of slender columns. The deck cascades from the center of the plot to a human-scale height at its periphery, creating a variety of public spaces below it. 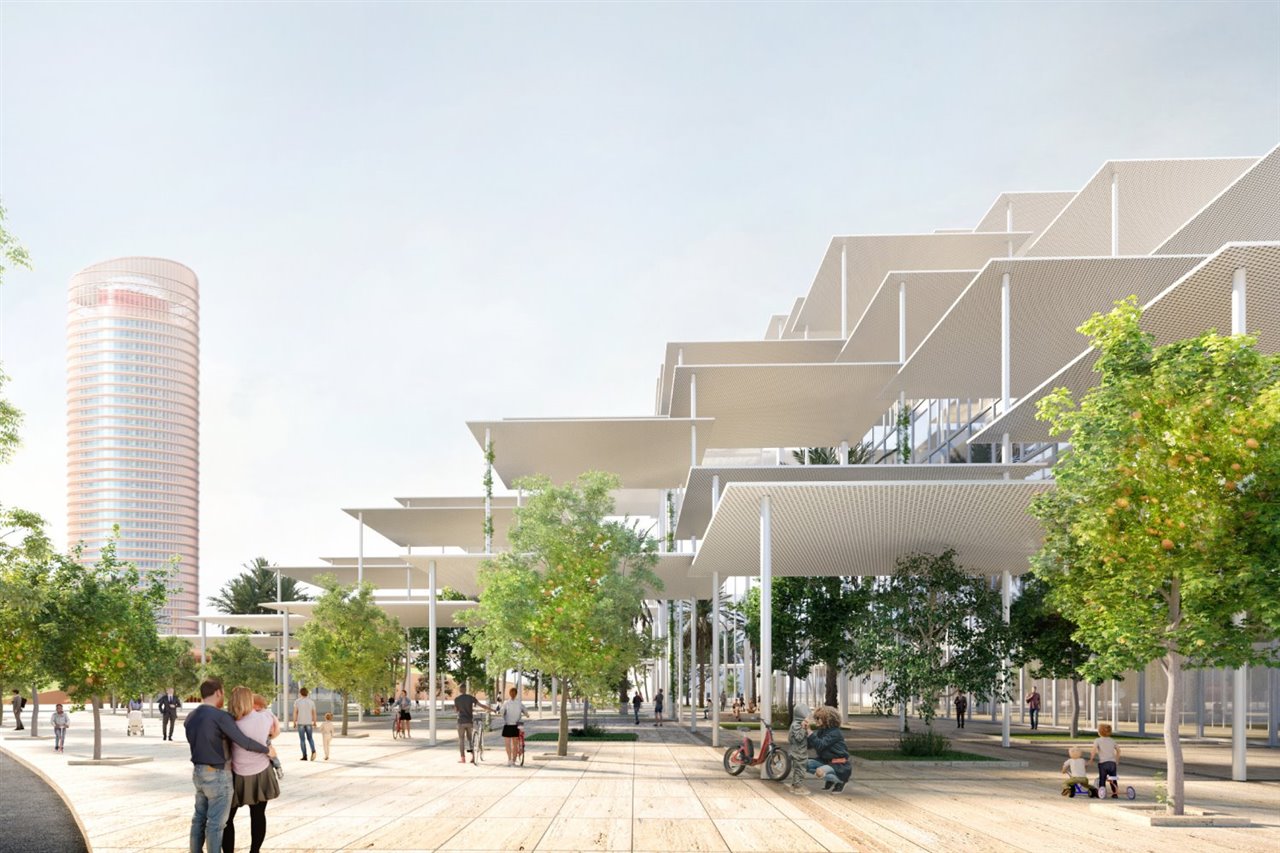 The new Joint Research Center connects directly with the American Garden and the Torre Sevilla market in a continuous public space that is both a square and a promenade. 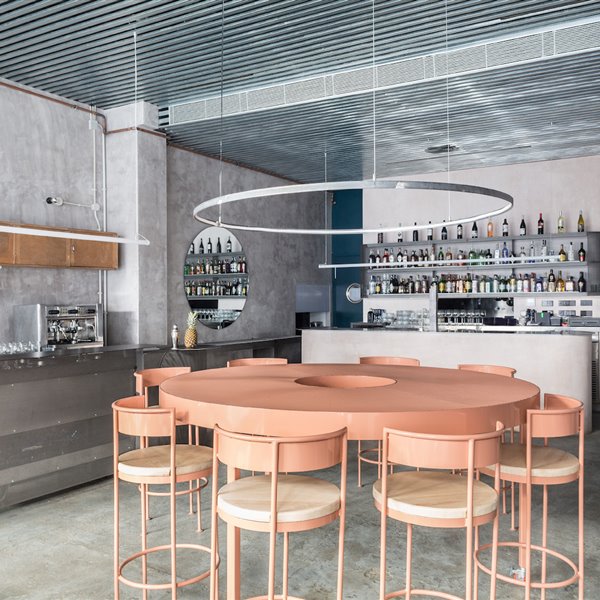 Inside, the functions of the new JRC building are organized with a public and service program such as a dining hall, a conference center and social spaces on the ground floor, while offices and research units occupy the upper floors for privacy. and security. Collaborative workplaces face the square, while workspaces that require more concentration face the garden. The proposed design is made to be completely flexible and adaptable according to the future needs of the JRC. 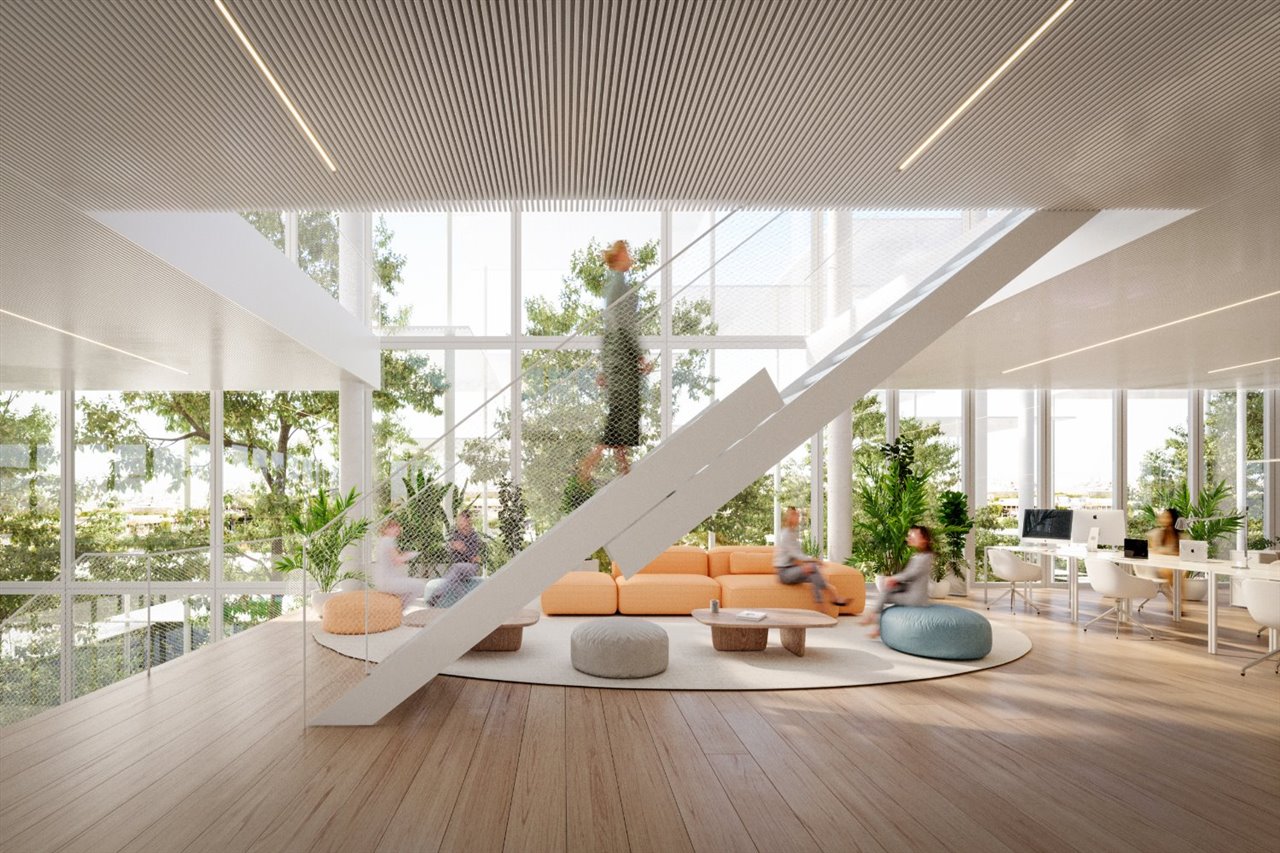 The building’s structure is low-carbon concrete, reducing up to 30% of typical carbon emissions, while the cloud of pergolas is made from recycled steel.